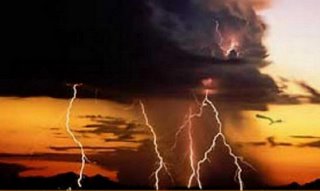 Hot damn...it is raining....and what is weird is the birds are making the damdest racket I have ever heard...The trees are full of those ugly black birds, not grackels but the black birds with shiny blue on their wings and they are raising 3 kinds of hell.Freaky.Fuck the birds, it's raining...If it rains long enough and steady enough it will help the farmers and we will be able to have the cookoff.
I haven't been to sleep yet. When I get into a good book, it is hard toput down.Plus I plugged away at poppit for a few hours too. When I went outside a few hours ago to get the paper, the yard was flooded..soaked my houseshoes and socks, but didn't even care...It's raining ....
There were two articles in the Dallas Morning News. One that truly pissed me off and made me laugh, plus one that made me sad..The one that pissed me off is the one about marlboro cigarettes. Seems last week the Socialist government of Spain raised the taxes on cigarette manufacturers in response to what it called a flood of cut-rate brands targeting younger smokers. Spain's top manufacturer, Altadis, responded by raising their prices. But American gint Philip Morris shocked everyone by lowering prices for Marlboro by around 15 % and making similar cuts for two other brands in Spain, infuriating consumer groups, doctors and even cigarette vendors fretting over lower revenue. The good part of this story is that the people went on strike by refusing to sell Phillip Morris products in Spain.
good for them...
What shocked the shit out of me was....the prices of cigarettes.Now that is funny. I haven't smoked in over 30 years so don't pay attention to what the prices are other than I knew they were high...A pack of Marlboro goe for $4.63 in Italy, $6 in France, and $9 in Britain. In the U. S., in mid-Manhattan, a pack of Marlboros range from $6.80 to $7.40 depending on the type.fuckme till I smoke smoke smoke that cigarette..(old cigarette commercial...most of you are too young to remember.)
I laughed till I blew snot. ....any one who still smokes and pays that much for their cigarettes...deserves to get lung cancer. Well, no one deserves lung cancer, but still...judas priest...Puleeeeeese.....give me a fucking break....anyone that still smokes(I know there are plenty of you still out there) and spends that much money for something that is fucking going to kill you...well...the goddess has a special bip saved just for you..hooboy, I know I am going to piss people off with that one...and I know what your thinking...I will probably drop dead because my arteries will be clogged up with blue bell ice cream and dr.pepper..But it didn't cost me $70 for a 1/2 gallon or $7 for a dr.pepper....I bet every time an American Indian sees a white person light up a cigarette they burst out laughing.Redman's revenge..hoooboy...what a bunch of schmucks...

oh, hell, that makes me laugh so much..I don't even want to get to the sad part...hard to feel sad when I have a mental picture of you smokers paying $7 for a pack of cigarettes......hoooooooooboy....hahahahahaaaa
Posted by yellowdoggranny at 1/28/2006 07:32:00 AM

I thought they were cheap in the US, i don't really know how much they cost in the UK as i don't smoke, but i think they're about £4, so what's that? About $7-8? But anyway, i don't smoke and i still coughed out a lung in the last two days, i doubt smoking would help...

Back in June or so, when I was living in Montana, Marlboros cost about $5, give or take a quarter. I know, because when I was working at the evil grocery store, you wouldn't belive how many poor people were shelling out big bucks for the ciggys. It's crazy, because they didn't have enough money to keep warm in the winter, but they would spend $100s a week for their smokes.

What is really sad is seeing a young mom and dad with several little ones at the checkout counter buying goceries on foodstamps and paying cash for a couple cartons of cigarettes. That just ain't right.

okay, i'm a smoker. i spend four dollars for a pack of smokes. is it stupid? yes. could that money be helpful elsewhere? yes. does it make my asthma worse? yes. did your post piss me off? no. try again.
i've tried to quit. a few times. it's just so damned hard. something upsetting happens and i'm right back where i started from. but you quit, so you know all that.

It rained! It rained! The ground is still wet here.
And I buy a carton of 10 packs for $27.00, plus tax and that's the major brand, not the cheap brands. So, less than $3.00 a pack. And yes, I probably deserve lung cancer.
When I was in Newark, NJ on business, I was shocked at the price of packs up there. But I had brought my own with me.

The old man smokes American Spirits. They are cheaper than regular cigaretttes but everyone charges the same for them. I think almost $6 a pack here. He buys cartons.